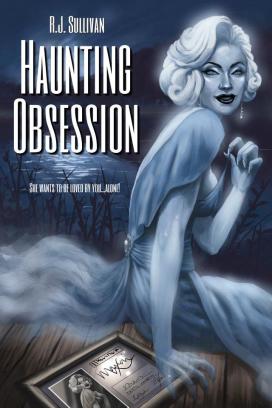 I’m super-thrilled to announce that my Amazon top-40 bestselling sexy ghost story Haunting Obsession will have an ACX (Amazon) audiobook version released later this summer. The new format release is in partnership with Seventh Star Press as one of their first titles being adapted to audiobook.

I’m super-excited about this development for a couple of reasons, the first is that I’ve been hoping to adapt Haunting Obsession to audiobook since the initial book release in 2012.  I think the novella length and finding the right voice talent to take on the Maxine Marie / Marilyn Monroe voice will elevate the drama to new heights. It will also open the material to an audience that just plain prefers audiobooks over print (Something I am coming to understand in recent years).

Speaking of vocal talent, I can’t believe our luck landing newcomer audiobook narrator Danielle Muething for this project. As soon as Danielle submitted her audition, we (me and Stephen Zimmer and Holly Marie Phillippe of Seventh Star Press) knew she’d nailed it. Incredibly, Haunting Obsession will mark this talented newcomer’s third completed audiobook project when it comes out.

On the topic of auditioning for Haunting Obsession, Danielle said, “My love for Marilyn stretches back to my childhood and the first time I saw her in Gentlemen Prefer Blondes. 30ish years later I saw an audition that gave me the chance to brush off my Marilyn impersonation and had to go for it.”

Want to find out why I’m so excited? Want to hear a short sample? Sure you do! Click the video at the bottom of this blog to hear a piece of Danielle’s audition. I’m sure you’ll be as excited as I am to finally hear Maxine find her voice.

Watch this space for updates and official links when the audiobook goes live!

Some notes: Haunting Obsession is a sexy ghost story aimed at adults. To keep this video “safe for work”, I’ve”scrubbed” Daryl’s potty mouth, so you’ll hear audio dropouts. The official audiobook when it comes out will be uncensored and unabridged. Also. since this is the audition, Danielle’s final reading may differ in minor ways, such as inflection and emphasis.