The anthology A Big Book of Strange, Weird and Wonderful Volume 2 was released December 1. What follows is the introduction, composed by me,  that opens the volume. 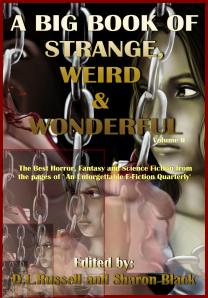 In 2009, an Indiana Networking site announced a new publication called Strange, Weird, and Wonderful Magazine was open for submissions.  So one by one I sent in what I thought were some of my strongest selections and all were immediately rejected, so I composed something new.

“Able Bodied” appeared in the Winter 2010 issue, and Vol. I of this annual.  Newly motivated, I continued to shop my stories around and quickly realized SWW offered unique opportunities.

Let’s talk word count: A “limit” of 15,000 just isn’t done. Most editors preach the shorter, the better, but D.L. emphasized great stories dictate their own length, not the needs of the editor.  And as trends shift towards more electronic reading, print costs, the primary reason for the demand for shorter stories, no longer mattered.  But writers couldn’t practice excess simply because they had the room to do so. D.L. and Sharon also believe in discipline, and the importance of every word’s impact.

Soon after, I released my first novel, and D. L. asked if I was interested in contributing a story as the featured author. I said “yes” and submitted “Inner Strength,” the story in this volume.

Though this marked the first appearance of “Becky”, it was by no means her last. Readers can follow her adventures as Paranormal Investigator “Rebecca Burton” in the short story Backstage Pass and the novella Haunting Obsession, my latest releases through Seventh Star Press. Her story will continue, but she appeared in SWW first, and that makes me unreasonably happy.

SWW offered the perfect starting point for me and other writers serious about our craft. And I’m grateful it was there for me. I also know D.L. and Sharon have great plans for the brand: original anthologies and expanding into novels, where they’ll continue to offer a fantastic platform for talent. And so while this “Best of” volume marks the end of an era, I look forward to seeing the Strange, Weird and Wonderful tales of the future.

Order your copy from Amazon or the pulbisher’s site!