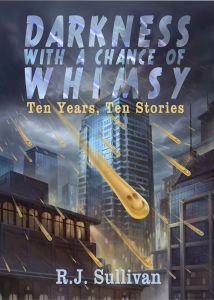 Click here to see the introduction to this series.

By the time “Fade” was picked up by James W. Kirk to run in Indiana Science Fiction Anthology 2011, the story already had a long and interesting history.

Fade was directly inspired by an obscure, quirky song by Cyndi Lauper, released on the obscure, quirky album Blue Angel. At the time, the release was difficult to track down (this was the 80s, it’s easy to find now) and I did so only after years of searching. Here is the song posted on YouTube. So inspired, I wrote the story for a college assignment, stuck it in a drawer, and forgot about it for several years.

Advance to 2001. I met one of the most amazing ladies in the universe, by which I mean Mary Kay Woolsey, not Cyndi Lauper, though I met her, too, because of this. MK was battling cancer, and, frankly, a number of shitty circumstances in her life. Several fans banded together to launch an archaic and labor intensive version of what would now be a Kickstarter campaign, about a decade before the platform was in place to make it easy. For my contribution, I partnered with artists Kathy and Roberto Campus and “self-published” Fade to fans as a “gift with purchase” to anyone who donated $25 or more. 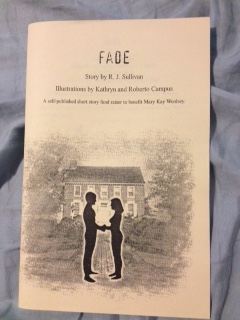 By “self-published,” I mean I took a few sheets of paper, folded them in half and stapled the middle. (Hey, free gift with donation, whaddaya want?) Dig that booklet with snazzy Kathy Campus (now Kathy Sweeny) art. In any case, our combined efforts raised $1,600 for MK (Cyndi herself donated some autographed 45 singles because she’s awesome that way) MK recovered and she’s alive, well, and still one of the most amazing ladies in the universe.

I was fortunate to get Roberto Campus on this project. He has since gone on to rock it pretty hard with mad art skills, as you can see here on his website.

And that, ladies and gentlemen, is the short version. So anyway, back to why you’re here.

The setup: Anna Blue is visiting her parents over Thanksgiving break. She brings the boyfriend home to meet the parents, and is also hiding a recreational drug habit. Said boyfriend Spencer Blake is floundering about being loyal to her or holding an intervention. During a fight about this very issue, Spencer and Anna literally fall into her father’s basement laboratory.

Her eyes opened. “Ohhhh … what happened?” She tried to rise.
Spencer placed a hand on her shoulder, pressing gently. “Wait. Make sure you’re not dizzy.”
“Honestly, I’m all right.”

He helped her to her feet. She smiled and put her arms around his neck.
“My hero,” she murmured. She pulled his face down to meet hers. He gave her a quick kiss, then pulled away.

“No, you’re not all right.” He pulled her hands apart and stood, separating them.
“What’s wrong? Why are you angry?”
“Why shouldn’t I be?” He turned and glared at her. “This wouldn’t have happened if it weren’t for your antics.”

“I’m sorry, okay? What do you want from me? I just needed something to take the edge off.”
Spencer swore and turned back toward the steps.
“Don’t tell my parents, Spence. Please. Just give me a little time and help me.”

He turned toward her. “I’m trying to help you. I just don’t know if I can keep doing this by myself.”
Anna nodded, dismissing the subject. She glanced around the shop, eyeing the tools. He waited for any indication she really cared about herself, that she knew she was in trouble. But instead she simply looked distracted.

“Y’know, I’ve only been down here once or twice. Weird he left it open. He’s usually careful about locking it.”
“If that’s the case, we should go. They’re expecting us, and I don’t think you want to be caught down here.”

“Hey, what’s this?” She reached down and picked up a helmet made of reflective blue metal from the edge of the workbench. It resembled some sort of hardhat, complete with a dangling chinstrap. As Anna shifted the helmet in her hands, Spencer noted some sort of circuitry on the inside casing.

Seeing her rummage through her father’s private work sent a new surge of anger through him. “Let’s go.” If she wasn’t allowed down here, she was going too far. He considered tossing her over his shoulders and bodily carrying her upstairs.
Shrugging in obvious defiance, she raised the helmet and placed it on her head.
He rolled his eyes at her petulance, and wondered if she’d actually taken some of the drugs before he caught her.

She stared back at him, a silly grin on her face. Maybe she hit her head after all.
He sighed, biting back words of mounting frustration. “There. Happy now? You’re wearing it. It’s too big for you anyway.”

“But what is it? Is Daddy inventing a new game, or a tool to punch holes in the wall—” She stabbed her finger at the drywall behind her. A sharp popping noise assaulted their ears, and a moment later they both stared, dumbfounded, at a wide gaping hole in the wall.

Nice! She broke something! “That’s it! I’ve had enough.” Spencer slammed his fists into the work table. Sudden pain fueled his anger. “Screw this. You wanna keep playing games, do it without me.” He stormed up the stairs.
——
Next Posting in the series: Able Bodied
Click here to go to the dedicated ordering page of Darkness with a Chance of Whimsy.

Now thru Friday, you can order the paperback edition of GIFTS OF THE MAGI: A SPECULATIVE FICTION COLLECTION at 15% Off, delivered just in time to fill out your Christmas list! Click here to read all the details on the SFG Website! 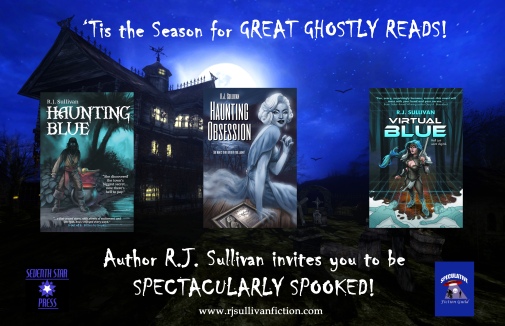 So today is Cyber Monday and Seventh Star Press is putting two of my titles on sale (plus an anthology in which I can be found) for 99 cents each. Respectively, with page links, they are:

I have made three videos promoting the sales, which you can find here.

If you have not read my books before, this is a great opportunity  to jump in at a huge savings. If you have, please consider purchasing an ebook as a gift for a friend.

If you’re wondering how else you can support me, please email, tweet, or share on Facebook the link to this blog on your wall. Post the videos, If you feel inclined to praise the books when you do so, that might also help.

Thanks for your consideration. Whatever happens from this is every bit as much from the efforts of my readers as it is from me.  Have a great Cyber Monday.

As promised, here is the reading of the start of Blue Christmas, as featured in GIFTS OF THE MAGI: A SPECULATIVE FICTION COLLECTION available now.

All proceeds from this collection benefit Indy Reads Books.

So here’s what I’ve done with my last day and a half, though to be fair, it should only have taken me a few hours if not for the free interface on a certain popular video site that won’t let you save your work. So I had to start over three times. That means, yes, I know about the typo, and no, I can’t fix it, because that means starting over. Again.

But y’know what, I’m proud of it anyway, and I hope you dig it, too. Click the image to check out the official book trailer to Gifts of the Magi: A Speculative Fiction Collection.

After months of preparation and weeks of teasing, I can finally share the big news about the NEW ORIGINAL collection of holiday stories co-edited with my good friends John F. Allen, E. Chris Garrison and me.

The anthology is called Gifts of the Magi: A Speculative Holiday Collection and features new tales by our friends and ourselves, most of whom have series’ in progress, and feature a story set in the world of that series. And yes, I have a new story in this collection.

That’s right, Blue Shaefer and Rebecca Burton are returning in a brand-new short story that takes place on Christmas Eve! In it, Rebecca gets word that someone is trying to cause trouble for Blue, so she crashes in on Blue and Chip’s celebration, and they’re off on another paranormal adventure. I think it strikes a great balance between addressing her past and setting her up for an exciting future. The title, of course, could only be Blue Christmas. I hope you all love it as much as I do.

Besides featuring a new story for Christmas, Gifts of the Magi offers a number of other firsts. It’s my first attempt at co-editing an anthology (a stressful endeavor that can test the strongest bonds and make them even more strong afterwards) and my first venture into  indie publishing under a new brand, in a co-partnership between John, Chris and me, SFG Publishing. It’s our first attempt at supporting a local charity. In this case, every cent raised goes toward Indy Reads Books and the good work they do.

Besides a new story by me, you’ll find a new Ivory Blaque tale by John, a new story set in Chris’ Tipsy Fairy Tales / Road Ghosts world, and stories set in several of my favorite worlds, created by authors Chantal Noordeloos, Katina French, Debra Holland, and an awesome standalone story by my good friend A.D. Roland that blew me away, and many more!

Copies will be sold at Indy Reads Books and online in both Amazon ebook and paper versions.

Click here to learn about the December 4 book signing at Indy Reads Books Indianapolis, with the editors and several of the authors present.

But don’t let me keep you from finding out more. Click here to read the official announcement with full details and the preorder link to get yours!

Here’s the official cover reveal and pre-order of Vampires Don’t Sparkle! An anthology releasing in mid-March edited by Michael West and including my story Robot Vampire. I’m proud of this one of for many reasons. First, I enjoyed the challenge of taking the title “Robot Vampire” and making something out of it. Secondly, it’s an honor to be placed among such a distinctive list of established horror writers. Last, but certainly not least, the anthology is a fundraiser for cancer research, and I’m honored to be a part of it. Here’s the full press release.