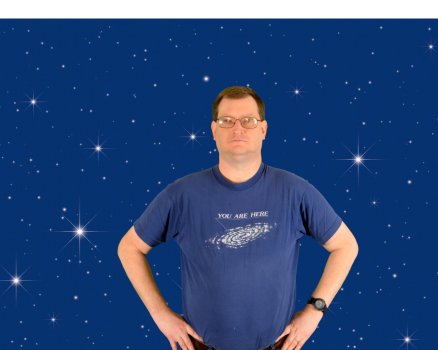 First of all, I want to thank SA McClure for asking me to be a part of the Rogue Skies Party Room today. My name is R.J. Sullivan. I write ghost stories, fantasy, and, most notably for this blog, I’m promoting my SF spaceship stories. But as you read this, you might want to call me Old Man RJ, as I will prove not only that I likely skew a bit older than many authors and readers participating here, but that my tastes run “older school” still.

I was a teenager in *mumble*-80-*mumble*. I’d seen Star Wars on the big screen as a kid and lived for Star Trek TOS TV reruns. My parents didn’t understand, but neither did they hold back my interests. I think they were just glad I liked to read.

Once a year when we traveled out of state, we’d pay a visit to my dad’s sister and her nerd husband, my beloved “Uncle Mick”, the only relative in the extended family who “got” me. He ran a used bookstore on the weekends, and had a huge collection of SF paperbacks in his basement.

On one of our overnight trips, he  said to me, “it’s time to grow beyond those Star Trek books.” I emerged from that basement with grocery bags full of classic SF books by oddball author names such as Asimov, Ellison, Heinlein, McCaffrey, … and thus began my education on the array of historical SF authors whose careers, in many cases, had peaked before I was born.

So many of the titles on this list are of the Classic SF variety, and may be new to you. And that’s okay.

NOTE: Each title is linkable to an order page where possible. Two titles are available only through secondhand resellers and so are not linked. All artwork shown is the same or similar cover art to the editions in my collection. So without any further ado, here then are my favorite (mostly classic) spaceship SF adventure novels. 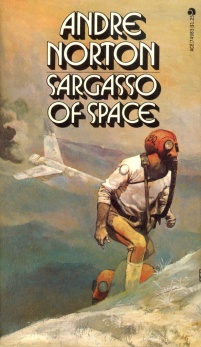 The Sargasso of Space by Andre Norton Andre Norton is the best known pseudonym of Alice Norton (because in the 50s, girls who wrote SF had cooties, don’cha know). She’s best known for her Witch World fantasy series, but if you want to know who Gene Roddenberry was ripping off the most…I mean… was the most inspired by when creating Star Trek, this 1955 first book of the Solar Queen series is ground zero. Tonally, it’s Star Trek in all but name. A young engineer gets assigned to the Solar Queen, whose mission is to explore strange new worlds… you get the idea. The ship follows a signal onto the surface of a planet, only for the crew to find themselves unable to lift off due to a sudden power drain. Then the space pirates show up. The race against the clock is on in a marvelous “juvenile” story that’s still a lot of fun. 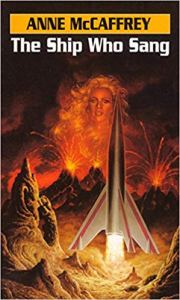 The Ship Who Sang by Anne McCaffrey. Though best known for her Dragonriders of Pern books, McCaffrey wrote these five novellas throughout the 60s. The setup is somewhat odd. Physically disabled babies with otherwise normal brains could become “shell people”, raised and educated, then transferred into various complex machinery for greater efficiency. Specifically, the novel follows the “brain” ship Helva and her “brawn” pilots. In the first short story, her “brawn” is exposed to a fatal radiation and she must watch, unaffected by the danger but helpless to assist during his last moments. The feels! Much later the stories became a multi-author series of books but I can only speak about the first one, which I recommend highly. 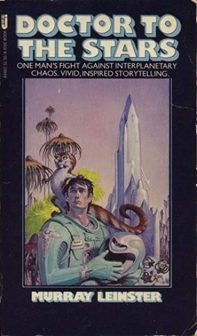 Doctor to the Stars by Murray Leinster collects three novellas featuring Dr. Calhoun from the Interstellar Medical Service, and his companion Murgatroyd, an extraterrestrial squirrel with a highly aggressive immune system ready-made for finding last-minute cures that will stop potential plagues dead in their tracks. This is a fun if not deep read by today’s standards. 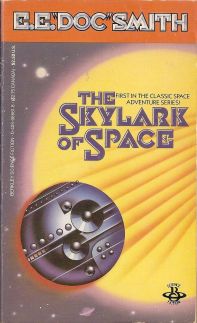 The Skylark of Space by Edward E. “Doc” Smith Legit 1920s classic SF pulp adventure that puts the adventure way before the SF. A scientist and his millionaire buddy cross wires in a test tube or something equally logical to create a new force field element–as scientists will do–and create a damn near impenetrable power bubble with infinite velocity to boot. So they build the titular Skylark ship and put the bubble around it, and zip around the cosmos righting wrongs on alien planets, centrifugal force and speed of light limitations be damned. The influence of this novel and its three followups can be felt through many generations of writers, and I remember thinking I saw its fingerprints all over the 80s Joe Dante-directed SF kid adventure film Explorers. 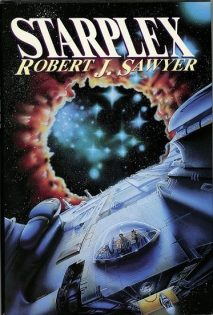 Starplex by Robert A. Sawyer One of two contemporary titles by a favorite “big six”published author still producing (his novel FlashForward was the basis for a one-season ABC series stopped too soon), Sawyer is a proud Trekkie, and Starplex shows its influence just as proudly. The titular science ship crewed with a mix of humans and aliens are taking a closer look at the wormhole technology that make interstellar travel possible. Mishaps and misunderstandings occur. This unabashed love letter to Star Trek is well worth checking out. And if you dig it, there’s a lot more Robert Sawyer awesomeness out there. My personal favorite is his spaceship-free WWW Trilogy (Here is book 1).

Trading in Danger (Vatta’s War Book 1) by Elizabeth Moon  Another contemporary “Big Six” published author. This series gets my vote for the best military SF with a strong woman character (WRITTEN by a strong woman with a military background). The series follows “Ky” Vatta, kicked out of the interstellar military. Ky is torn between returning to her family transport business or becoming a mercenary. So she tries…both. If you love this, there are seven books to her story, and growing. (Also brilliant though it lacks spaceships: Moon’s Arthur C. Clarke-Award Winning novel The Speed of Dark) 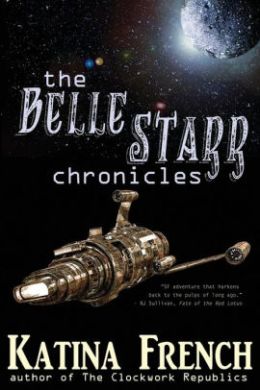 The Belle Starre Chronicles by Katina French My indie author entry in this list is that of a talented colleague whose book I loved so much, I offered a cover blurb. Four novellas combined into one tight package, the Belle Starre books tell the adventures and frequent mishaps of Captain Shaen Morris of the mercenary transport ship Belle Starre. In Kat’s version of the future, interstellar travel is a lucrative profession with a costly downside–the FTL effect slowly drains away a pilot’s sanity. When Shaen goes a little crazy, that’s not hyperbole. My cover blurb reads “SF adventure that harkens back to the pulps of long ago.”

Thanks for reading over my list. It’s nowhere near complete, but these are indeed among my very favorites, which, along with media influences like Star Trek and Star Wars, may have had a huge impact on my own Red Lotus stories.

Commanding the Red Lotus by RJ Sullivan collects three novellas in one volume. Sayuri Arai, privileged daughter of a corporate mogul, abandons a promising career to find her own path. She invests in a broken-down asteroid mining ship and steps in as the commander of its crew. Every day presents a new challenge just to keep her ship from falling apart and the bitter crew from killing each other. Can Sayuri unite the feuding factions, or will her rivals turn the entire complement against her? Commanding the Red Lotus offers a classic sense of wonder for today’s science fiction readers.

And if you haven’t already, check out the Rogue Skies Party Room and opre-rder the 25-SF e-novels for 99 cents Rogue Skies collection by clicking here.