The Brotherhood of D.A. Adams

I have already spoken to a great extent about what a terrific time I had at Imaginarium catching up with old friends and to meeting new ones. Some success stories are public and have been circulated around. Others are a bit more private. I have decided to share bits of this private story.

D.A. (Alex) Adams is a talented author of epic fantasy. He had been accepted at my publisher as one of the Seventh Star stable of authors before me. When we first met at Fandomfest in 2012, his was the only series of books out  by the awesome Bonnie Wasson and he coveted having to share her with me. And who can blame him. 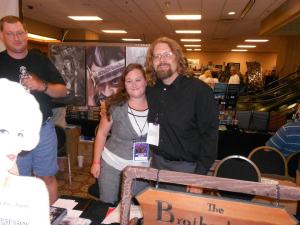 Alex and I sat next to each other for several hours that weekend, and had lots of time getting to know each other. I watched a loving father engage with his child while on vendor duty (not an easy thing). We talked about writing and being part of a small press family. He shared his opinion–often bluntly–about being a teacher in a collegiate environment that was morphing into a system toxic for both students and teachers. He spoke of  tremors in his hands, a lifelong affliction which seemed then to be under control. He had a mane of blond hair, matching beard and mustache, and a twinkle of optimism in the eyes.

In the years since, I have read his blog posts with interest, in which he speaks with the same blunt honesty about the devastating impact of divorce, the growing negative impact of social media, and the toxic college environment from which he eventually separated himself. He also spoke of a health condition that remains as mysterious as it is debilitating, which brings me to a few days ago.

I say somewhat shamefaced that when Alex approached me, I had to look twice and finally reference his name badge to figure out who was addressing me. The blond mane was gone, the twinkle diminished, though I still see some fight in those eyes.  We had several conversations that weekend, chatted about how his health has affected his everyday life, but also about old time rock n roll, the joy of writing, the unity of the writing community, and more. He said he’d just had some tests which would determine next steps with his condition. I was glad I had a chance to get caught up with this great guy.

Then a couple of days later, his next blog post went up. The test had revealed nothing–that there was no plan of treatment, and that he honestly didn’t know what to do.

Alex had no sooner posted this on his blog when something really cool happened.

Dave Mattingly of Blackwyrm Publishing (one of several small press publishers in the region who regard their competition as CINO–Competition in Name Only (I just made that up, feel free to steal it)) (and the sentence nominated for the most complicated series of parenthetical asides in a blog post ever–your welcome)–set up a fundraising page that lets the public help.  Why? Because the publishing community just rocks that way, and Dave is one of the hardest rockers out there.

Before I go any further, I would be remiss not to mention what Alex himself is quick to point out. Alex writes very cool epic fantasy adventure, and you can support him in a very direct way by buying his books. Check them out here.

If, however, epic fantasy isn’t your cup of tea, or you’ve already bought his books and want to do more, or you don’t even like reading but want to do something good for a hell of a guy, then please click this link to the gofundme page and become a part of the Brotherhood of D.A. Adams.

As of this writing, the Brotherhoopd has raised $930.00 of a proposed $1,000.00 in only four days. That in and of itself says much of the generosity of this community. I expect very soon, maybe by the time you read this, the “goal” will be raised.  However, anyone who knows anything about the medical field knows that $1,000.00 doesn’t get you very far. So let’s keep going, blow that number away.

Please donate and boost the signal. Thanks for listening.