Haunting Blue, a look back, a look forward 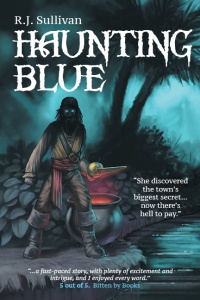 I spent the last part of Memorial Day Weekend and thru Wednesday night re-reading Haunting Blue front to back, checking the publisher proof against all revisions, ensuring that this will be the final, most accurate version of the story. It’s an odd thing for a writer, looking back on an earlier work.

Because our craft is one of constant growth, I can say without apology that if I were to start over from scratch, if I were to pen the first book in the Adventures of Blue Shaefer today, it would be a very different book than what it is now. I’d like to think it would be a better book.

An author’s writing is like a time capsule, at least to the author. As we gain experience, beginner’s mistakes become more obvious, tangents that we might have thought better of stand out more clearly.  I have heard that some authors, at least privately, have a tendency to disown, or try to disassociate themselves from, their first works.

Art by Bonnie Wasson for the new edition of Haunting Blue.

And while I “get it” to some extent, as I reviewed the work, head to toe, I can honestly say I am still very proud of Blue Shaefer’s premiere adventure. Yes, she’s melodramatic, over the top, and, yes, I roll my eyes at certain moments in the novel. When the time came to re-release the book, I had a choice to make–I could have gutted and rewritten the tale, or simply tweaked the text to address the bigger errors but otherwise let it stand as a time capsule of the start of my journey as a published author.

The great Harlan Ellison recently observed about his own early work (and I’m not comparing myself to a genius whose career goes back decades–this just happened to resonate) “I look back over my earlier stories and say, ‘eh, the kid did the best he could with the tools he had at the time.'”

I think this is very true, along with other factors. One that is obvious to me is my “everything plus the kitchen sink” approach. I thought of Haunting Blue as my one shot, maybe the only novel that I might ever put out, and I put my all into it, because who knew when the next book might get published. This is another factor that contributes to the drama of the tale. 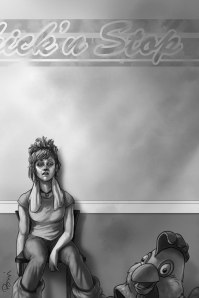 Art by Bonnie Wasson for the new edition of Haunting Blue.

Of course, I now know, and am blessed to be assured, that I have plenty of readers and a publisher very anxious for my next story. And my next, and my next. I don’t need to “put it all out there,” which brings far greater focus to my later stories, a benefit to my readers as much as myself.

Another reason to tweak rather than gut: it’s fair to observe that when I drafted my angst-driven high school punk girl, I was much closer to her age than I am now. Who am I to second-guess how much of my narrative is genuine, when I’m much further from the source?

So starting tonight, and into tomorrow, courtesy of Seventh Star Press, Haunting Blue goes back into print, with the major ebook formats, and the softcover hits a couple days later. It is slightly tweaked, with a new cover and interior art by Bonnie Wasson, a new poem by Nicole Rinaldi, (who also wrote the pieces in Virtual Blue). The softcover will look quite spiffy next to Haunting Obsession and Virtual Blue, giving the trilogy a unified series look for the first time.

Haunting Blue is a paranormal thriller, an edgy first novel by a new voice who did the best he could with the tools he had at the time. Having just re-read it, it still moves me and accomplishes what I intended. I still love it, and if you’re experiencing the story for the first time, I hope you will, too.