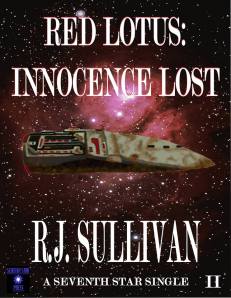 I’m excited to announce that tomorrow, Seventh Star will launch story two of my spaceship space opera e-book series: Red Lotus: Innocence Lost. The story picks up where Fate of the Red Lotus left off. Supported formats include Kindle, Nook, and iBook. I had such a good time crafting this one, I got a little carried away on the word count:  Innocence Lost is a hefty 17,000 words for an everyday low price of $1.99.

Revealed here for the first time ever is the new, original, and absolutely awesome cover art by Seventh Star peep John F. Allen. capturing the mood of the series perfectly.  As you can see, John does more than write great stories.
—

Commander Sayuri Arai has what she’s always wanted…at least, that’s what she keeps telling herself to fend off despair. In just the last few days, she’s purchased the antiquated Independent Mining Ship Red Lotus, invested in major repairs and upgrades, and taken on the role of its co-commander alongside trusted right hand man Dravin Sow.

Now, Sayuri finds herself at wit’s end. Her veteran crew of “Spacers” seems to take pleasure in citing her inexperience and odd “Grounder” ways while they correct, contradict, or dismiss her every order. Even Sayuri’s attempts to socialize with her new subordinates are rebuffed. But when space pirates attack and board the vessel, Sayuri and her crew must learn to work together if they’re going to survive.

Red Lotus: Innocence Lost is the second of a series of science fiction novelettes that began with Fate of the Red Lotus–re-igniting a classic sense of wonder for today’s readers.
___

I hope you get as big a kick out of this as I did writing it.

Red Lotus: Innocence Lost goes live Tuesday, May 6. The devoted product page seen here will be updated with links as soon as each version goes live.