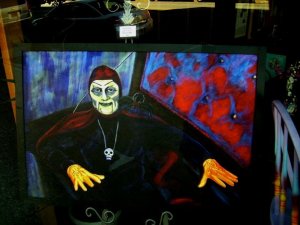 Today, Indiana horror fans from my generation, give and take a few years, received the sad news that Hoosier TV pioneer Bob Carter has died. If you lived outside of Indiana, you’re probably saying “who?” Even if you lived here, the name may not immediately click. But if I tell you Bob Carter was the real-life identity of Sammy Terry, recognition and fond memories are bound to set in for so many who watched Hoosier television from 1962 to 1989.

Since the news hit, dozens of tributes and memories have flashed across my Facebook page. At the same time, it saddens me to see the “official” local media gloss over or minimize what Bob Carter brought to Indianapolis television for almost 30 years. 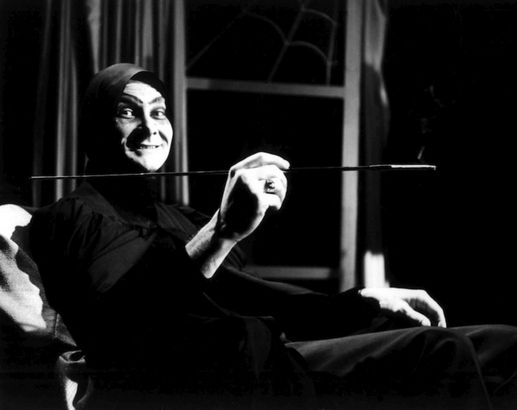 Sammy Terry was the brainstorm of Carter when he joined the programming staff of local TV station WTTV Channel 4. TV itself was still fairly new, local TV with an identity even more so. Though there were sporadic gaps during his run, the show remained a local staple until 1989, when Bob’s Sammy wished us all ” many… pleasant… nightmares!” for the last time. I saw him for the first time as a single-digit-aged boy of the early 70s, and through the  years he introduced me to the Universal horror movies, to Hammer films, to Vincent Price, to the first two Blob movies, and to Godzilla (and his less intimidating counterpart Gamera) and much, much more.

But more than that, he was a part of a time when TV stations were truly local and community-driven. WTTV had a stable of such hosts. As a kid, I started the day with “Cowboy Bob” hosting cartoons, “Janie” hosting more cartoons, and “Popeye and Peggy” hosting….you guessed it, still more cartoons. We also had Jim Gerard, a TV talk show who focused exclusively on things Indianapolis. Throughout my childhood and into my college years, Sammy Terry came on Friday and/or Saturday nights, and I missed very few of them.

Depending on where you lived, each major metropolitan area had its own late night horror host. Every city had its own “local” celebrities, embracing the best parts of both words, local and celebrity, each with fans in the hundreds of thousands. You could see Cowboy Bob at a popular restaurant, Janie at the local schools. Mrs. RJ’s girl scout troop took a tour of Peggy’s studio. 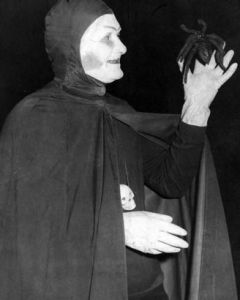 While I am prone to exaggerate to prove a point, I was truly a huge fan of Sammy Terry. I think back to my poor sixth grade teacher who had to read through my three-part multiple-page “epic” creative writing assignment “Sammy Terry Versus Dracula” (Sammy won) and hope it brought a smile to her face as much as this fact makes me blush today. I have two signed photos of Sammy–an official publicity shot and a piece of fan “art” I drew myself. I presented both at the Paramount Music Palace restaurant (another Indiana treasure now gone) to which he quipped “Oh, what a HOR-rible picture!” Which was, of course, a compliment.

But removing my personal memories, Bob Carter was part of an era difficult to explain to those too young to have lived it. Like so much connected to horror, the local horror host was part of a grass roots effort, this one by TV stations to re-introduce classic horror films to a new generation, (that TV hopped on this trend on the heels of the success of Forrest Ackerman’s magazine Famous Monsters of Filmland is, I’m certain, no coincidence).

Then with the dominance of cable, movies and cartoons went “national”, and TV programmers sought alternative programming, giving rise to the info-mercial. The result of this speaks for itself. Quickly, and before most people realized it, true local community television died, and for reasons baffling to me, cable stations have failed to try to make the TV host a national phenomenon. (What few attempts I have seen are sad short-lived shadows, but that’s another discussion.)

One of the many reasons why the original mid-80s Fright Night will forever rock is its homage to this era (an homage mostly lost on later generation viewers who think a random Chris Angel riff works just fine) in the character of Peter Vincent, played by the marvelously underrated Roddy McDowell. Peter is a fictional local horror host who speaks for all local horror hosts of the time to comment on TV’s then-changing attitudes toward their status. Peter Vincent is horror films’ acknowledgment of the debt it owes to all such local horror hosts (and as far as I know, remains the only such tribute).

But in Indiana at least, there’s a sort-of happy ending to this melancholy tale. About three years ago, Sammy Terry-mania returned in a big way. Bob Carter, who’d retired from personal appearances in the early 2000s, gave his blessing to his son to take up the Sammy Terry persona. To some people’s surprise (though not mine) the buzz from the local community has been fairly strong, and last year, Sammy Terry returned to local television, with Mark Carter donning the makeup, clothes, and shtick.

Today, five new TV specials and tens of thousands of fans spanning multiple generations later, the hand-off is complete. Mark will never replace his father, but he just might take Sammy Terry into the 21st century, and make the old ghoul relevant again. And that, as I like to say, would make me unreasonably happy.

Rest in peace, Bob Carter. Your legacy as a Hoosier television pioneer is secured, and you will be remembered fondly for generations to come.