Marilyn Movies: The Good, the Bad, and the Meh, the last of three parts.

Finishing up with the rest of the almost-good and the almost-bad, also known as the “Meh.”

Go back to part 2

How to Marry a Millionaire

Popular Consensus: Marilyn shows off her comedic chops in this madcap comedy about three women trying to get their hooks into various rich guys.

How I see it: Whatever. And when I say “whatever” to a film co-starring Lauren Bacall, you know something’s wrong. This movie almost fell under “bad” but I’m in a good mood today. Maybe it was edgy at one time, but it’s eye-rolling today. How to you make a knockout blonde like Marilyn look “nerdy” and intelligent? Put a pair of large goofy glasses on her face, of course. Ho. Ho. Ho. Look at the image to the left. Is that hysterical to you? Right. That’s my point. Add to that, some near-sighted jokes that make Mr.MaGoo look sophisticated, and it all adds up to a movie you can take or leave, and you’re probably better off leaving.

“Known for” Marilyn Moments: None that I’m aware of.

Popular Consensus: A sex-comedy musical with Marilyn at her best. 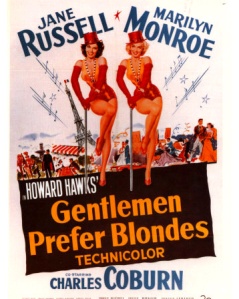 How I see it: Okay, this one *almost* ended up in the good column. To be fair, there’s much to like here. The comedy is snappy, Jane Russell is also quite easy on the eyes, and there are at least two landmark musical numbers. The great moments are draped around a plot that barely exists, making the movie as a whole pretty generic, and as a result, one that doesn’t get a lot of replay in my collection. But that’s just me, you may feel otherwise. Even as I get ready to post this, I wonder if I’m judging too harshly. You decide and send me a nasty-gram. I may even admit I deserve it.

“Known For” Marilyn Moments: The hot-pink dress dance number to “Diamonds are a Girl’s Best Friend” Madonna paid homage to in “Material Girl”. (Also note the human chandelier in the number that would make Lady Gaga jealous). 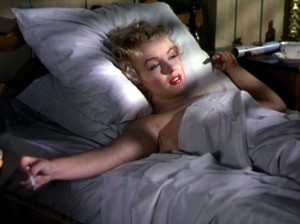 How I see it: Here’s another one that almost ended up in the “good” category. This film doesn’t work for me, and I think it’s because the plot is a 1940s film noir. You have Joseph Cotton (!) as the troubled husband, Marilyn as the no-good wife plotting to do him wrong, the Naïve Young Couple as innocent as driven snow, the “other man” waiting in the wings to do in the husband. There are no characters here, only archetypes. Once you know the types, the movie proceeds exactly as you expect, including the “plot twist” you see coming a mile away.

Add to that, film noir should be that–dark. Black and white, lots of shadows. We need Humphrey Bogart in here somewhere. Instead, this plays in lavish Technicolor. It’s a disconnect.

But that’s just me. Again, there’s a lot to like here, just not enough for me to recommend it.

“Known for” Marilyn Moments: Posing under the covers with the shadow of vertical blinds across her face. She gives great strut in one party scene–seriously, the movie is “known” for these things.

The River of No Return

Cowboy and son and Marilyn on a raft escaping Indians.

Popular Consensus: A troubled production and missed opportunities resulted in an overall disappointment, then and now. 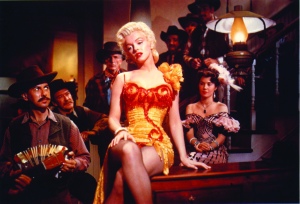 How I see it: I concur. The movie wants to be liked, and lays on the sweetness a bit thick. Rancher Robert Mitchum and his son end up taking Marilyn, playing yet-another showgirl, across the river to escape rampaging Indians after Marilyn’s no-good boyfriend causes trouble for everyone. Suffers from too many western clichés. One particular eye-roller is when Marilyn breaks out into song in the middle of the woods with a hidden band accompanying her. The blue screen rafting scenes that make up the last 20 minutes of the film do not hold up. It all plays out predictably and overall underwhelmingly.

“Known for” Marilyn Moments: None that I am aware of.

Popular Consensus: For the most part, overlooked.

How I see it: A black and white thriller early in Marilyn’s career in which she plays a babysitter hired to watch a young girl in a swank hotel room while the parents attend a party downstairs. It’s clear early on that Marilyn’s character has mental problems and suffers from some post traumatic stress, and that the night may lead to some Very Bad Things. Though the credits say otherwise, this movie plays very “B picture”, and that’s not a bad thing, given the mood.

It’s a surprising film, and another movie I almost moved to the “good” category. I give Marilyn credit for tackling this role, and even more surprising since she landed it fairly early in her career. She has some chilling moments, but putting my fanboy perspective aside, the role gets away from her. She just doesn’t have the acting chops to hold this one together, though as a curiosity piece, I find myself watching it fairly often.

Marilyn has tiny parts in the film classics All About Eve and The Asphalt Jungle. Both are great films for reasons that have almost nothing to do with Marilyn.

On the other hand, she also has a tiny part in Clash by Night, a fairly wretched film noir wanna-be with some of the most painful dialog ever delivered by any actress (in this case, Barbara Stanwyck). (And directed by Metropolis fame Fritz Lang! WTH?) The best that can be said here is it’s not Marilyn’s fault.

So there you have it., Feel free to comment and tell me if my ratings were good, bad, or meh.