Welcome to the third in a series of short interviews focusing on “Team R.J.”: people who have influenced, worked with, or played some other vital role in taking me where I am today.

Throughout the time, James remained dedicated to his writing, probably with at least as much passion and focus as I had in my own work. Horror was his genre of choice even then (I saw myself as more of a sci-fi guy, and still do), and his approach of unsettling the reader by dropping them into the viewpoint of mentally unstable characters did much to distinguish his stories. And it’s an approach he continues to use to this day.

Many years and a Facebook connection later, I caught up with James a few months ago and found he was returning to his writing after a long break. Since then, he’s released his first novel, the Butterfly Killer, and has had some success with his short stories.

James W. Kirk will be joining me December 18, noon-3 pm at Artesian Books in Martinsville, where he’s signing his novel The Butterfly Killer. Visit http://www.monicamcdowneythrillers.com/ and http://www.rjsullivanfiction.com for details.

Q: You were a driven, passionate writer when we first met almost…yikes, OVER…20 years ago. When did you get the writing “bug” and what drives you to keep pursuing it?

A: I remember a writing assignment from the third grade.  The teacher read the short story to the class, a comedic kind of story.  It was a hoot.  My classmates loved it and the teacher praised me.

Q: What writers inspired you? What made you pick the horror/psychological thriller genres as “your” genres?

A: I really enjoy John Connolly.  He incorporates the supernatural with the private detective genre.  Of course, I grew up with Stephen King—not literally, dang it.  My favorite film genre is psychological thrillers and horror.  The music I listen to relates well with psychological thriller, horror and the supernatural (Goth Industrial, Goth Metal, Symphonic Goth Metal).

Q: What circumstances caused a break in your writing, and what were the challenges when you returned to it?

A:  First comes love, and then comes James pushing a baby carriage.  Work and family came first.  After the kids were out of the house, I picked up the pencil and paper again.  Creativity never left.  I encountered no problems with the creative process and writing the novel.  The challenges came with the mechanics.  Grammar, sentence structure, passive sentences, bad words: “that” and “had,” and so on.  Thanks to RJ for jogging my memory.

Q: You attended a university campus for many years, worked in the university library, taught classes in your alma mater. How do you think the university environment affected your approach to the publishing business, good and bad?

Q: Tell us about The Butterfly Killer. Include an excerpt.

A: The Butterfly Killer is the first novel of a planned trilogy.  I’ve finished two-thirds of the follow up novel.  I am incorporating Christian spirituality.  The protagonist is chosen by God to metamorphose into an agent against evil.  The protagonist, female, is beginning to catch on by the novel’s conclusion.  The first novel focuses primarily on human evil.  The second novel incorporates the Archangels Michael and Gabriel, demons and saints in addition to just plain mean people.  Excerpt:

Engelbert didn’t believe in God. But, of course, God believed in him.

Engelbert pondered this truth, momentarily, as the flames of his life burned cruelly, just like his mother’s final moments, and as his arterial blood sprayed into the very shadows he’d considered his fortress, from his surgically cut throat by the hand of God, He who rules the darkness and its violent dramatis personae, he whispered: there is a God, Momma.

In this instance, “God” is self-proclaimed, the master puppeteer of other serial killers.

Q: Like I did, I know you’re re-approaching old stories from years ago and brushing them off for rewrites. Tell us what that’s like.

A: Taking old short stories and rewriting them was a lot of fun.  I got to see where I was and where I am now.

Q: I remember back in college, a singular science fiction piece in your group of short stories. Do you think you’ll continue to experiment with genres?

Q: One consistent aspect to all your fiction is an element of faith and religion. How does your faith affect what you write and how do you weave it into your narrative.

A:  I haven’t been to church in at least a decade.  There’s a lot about organized religion that gets on my very last nerve.  However, I am spiritual and believe in a higher power.  For example, our planet is around three billion years old.  Think about the trillions of events and nonevents leading to me sitting here talking about God.  I don’t believe in coincidence.  The Butterfly Killer contains graphic/adult material.  I don’t think “God” has given it much thought.

Q: Tell us about your sequel novel and anything else going on.

A: I’ve mentioned above the sequel.  I’m also working on an anthology of short stories, some new and some revisions of old short stories. 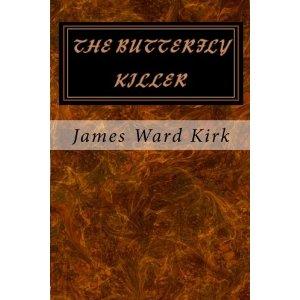